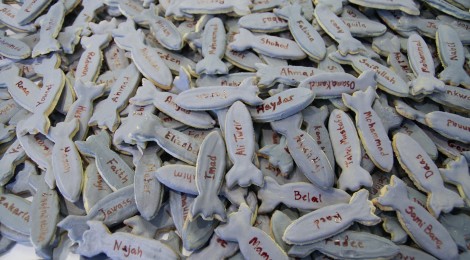 Solveig Thoroddsen creates a dialogue with the general public starting from offering them homemade cookies and asking them about their personal favourite word which she writes with sugar glaze on the cookie. Giving a sweet and tasty food to people is a positive action, appreciated in most communities. Through it, Solveig assumes simultaneously the role of the guest and the host. She wants to communicate with a large number of people from different subcultures, aiming a better understanding of the process of migration and the perception of the public on immigrants and “foreign bodies”. Creating and developing a dialogue based on common understanding is, according to her belief, the appropiate way to create and maintain a good society.

The idea relates to her graduation work Sweet Bombs from the Icelandic Academy of Arts. The artist baked bomb shaped cookies in the Cafe Teria of the Art Gallery and wrote on them names of victims from recent battles and terrorism actions. These were offered to the guests and gave birth to interesting dialogues.

Solveig Thoroddsen graduated the Academy of Arts from Iceland with a master degree in visual arts. She is interested by artistic actions capable to touch and reach new audiences. She wants to take the art out of the rigid context of museums, galleries and stages. She wants her work to be unframed, forthright and accessible to ordinary citizens.