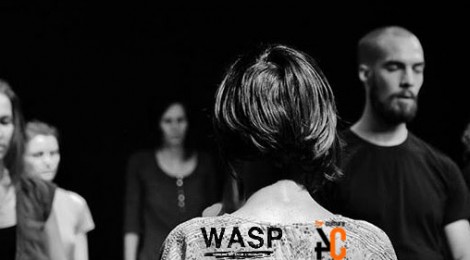 The Feldenkrais method starts by questioning the body.

It considers the movement as a powerful instrument of knowledge, a part of a complex phenomenon that encompasses emotions and thinking.

How can we become more aware of ourselves through movement?

Each of us has a unique way of moving and holds an infinite potential of actions. Just that, in lack of constant exploration and body awareness, these possibilities of action never materialize.

We feel before we understand.

This method teaches us that creativity, movement and sensibility in what we do changes the way we think and behave.

For Feldenkrais thought, perception and emotion are all present while we act.

Valentina de Piante Niculae is a choreographer and dancer, with a PhD in Performance Arts. She is Assistant Professor at the Choreography section of UNATC I.L. Caragiale in Bucharest. As a choreographer, she studies the co-present of different types of body intelligences, a route from the biological to the imaginary, that integrates different levels of consciousness: emotional, sensory, cognitive.

She is a visiting professor at various universities and research institutes. In 2009 she participated in the TTT – Teaching The Teachers – Bucharest seminar, along with Jan Ritsema, Bojana Cvejic, Jan Kopp and Jennifer Lacey. Starting the autumn of 2013, she began training in the Feldenkrais method at the Feldenkrais-Milan 8 Institute to become a practitioner of the method. Her last creation, M.E.L.T – Motion, Emotion and Lateral Thinking was premiered in October 2015 in eXplore festival – Bucharest, and later on presenting in 2016 ImPulsTanz – Vienna International Contemporary Dance Festival and Electro Camp Festival – Venice Forte Marghera.