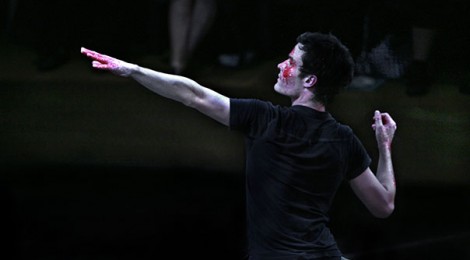 How to give different visibilities to well known social codes of our environment?

In a 3 days coaching project, the Brazilian choreographer based in Berlin, Thiago Granato, invites a group of artists to appropriate his creation methodology for the solo PLANO B.

Through decoupage and manipulation of movement, choreographic sequences are elaborated as strategies to activate a powerful critical communication between the performer and the audience.

Inspired by the work of the English artist Banksy, PLANO B creates a choreography that navigates through metaphors of our environment and relocates different contexts to suggest other visibilities with critical and ambivalent potential. Number of participants: max. 20 people

Thiago Granato is a Brazilian choreographer and performer that lives and works mainly in Brazil and Germany. His own work as choreographer has been presented in different countries as Brazil, Israel, Spain, Austria, Germany, Sweden, Norway, Italy, France, Romania, Lebanon and Korea.

He was dance teacher at the Estúdio Nova Dança (Brazil), as well as for the contemporary dance companies of Dani Lima, Déborah Colker, João Saldanha, Gustavo Ciríaco (Brazil), and Cullbergbaletten (Sweden). Also at the DOCH – University of Dance and Circus (Sweden). During the years of 2013 and 2014 he was fellow at Akademie Schloss Solitude in Stuttgart (Germany) where he developed his current project called CHOREOVERSATIONS which is a production of a series of solos based in conversations between different choreographers those will take Thiago’s body as medium of their communication. In 2015 he was an artist in residency at Les Recollets in Paris (France).